A really cool new feature in VSTS 2010 is Test Impact Analysis which let developers view what tests that are affected by the current code changes. Pieter Gheysens wrote a blog post on how to set this up in the CTP, but things have changed a bit in Beta 1 so I thought that I would show how it is done. Since it still is a bit unintuitive to enable it, it might change once again in the RTM. The reason that it is a bit unintuitive to set it up, is because you need to have the following things:

There are some changes and improvements in the area of executing unit tests in Team Build 2010. Mostly the changes make it easier to define which unit tests you want to execute as part of the build. In this post I will go through the different options that you have when it comes to running unit tests and enabling code coverage.

Running Unit Tests from Test List(s)
If you like to manage your tests using test lists (I don’t!), this option lets you run all the tests from one or more test lists. Here I have created two test lists, ImportantTests and LessImportantTests. Each test list contains two unit tests from two different assemblies.

To run all the tests from these test lists in a team build, locate the Test Metadata Files parameter and press the browse button to the right. This brings up a dialog that lets you choose which test metadata files (.vsmdi files) that you want to execute tests from. By default, all the tests will be executed. To filter this, click the Specify Lists button and you can select one or more test lists instead:

Running Unit Tests from Test Assemblies (a.k.a. Test Containers)
Since managing test lists in VSTS doesn’t scale very well, a common approach is to use Test Assemblies instead. In previous versions this was called Test Containers. So instead of creating different test lists to group your tests, you create several unit test assemblies and group your unit tests by adding them to the corresponding unit test assembly. For example you can have one (or more) assembly that contain pure unit tests, another set of assemblies that contain integration tests that you might only want to run in your nightly builds. To specify which test assemblies you want to execute, you use the Test Assembly Filespec parameter. This parameters contains a search pattern that should match the names of your test assemblies.

To use this approach in your company, you need to define a naming scheme for your unit test assemblies, such as Project.UnitTests.dll, Project.IntegrationTests.dll and so on.

Running Unit Tests by Priority
In addition to selecting which unit tests to execute, you can now further filter the tests by using the Priority attribute on your test methods. This is an attribute that has been around since .NET 2.0, but strangely enough there was no support of using it when running tests, neither in Visual Studio or in Team Build. In TFS 2010 however you can define a minimum and maximum test priority for your team build, meaning that all tests with a priority within that range will be executed as part of the build.

Here is how you decorate your test method with a priority.

Then, set the priority range in your build definition

Note that this is an additional filter that is applied to, in this case, all unit tests in all test assemblies that end with UnitTests.dll.

Running Unit Tests by Category
In addition to Priority, you can also filter your tests by using categories. This is very similar to priorities, but instead of working with numeric ranges, you define categories with meaningful names and apply them to your test methods.

To use this approach, decorate your test methods with the TestCategory attribute and then specify one or more test categories in your build definition.

According to the tooltip you should be able to construct the filter by using logical operators such as & and | , but this doesn’t seem to work in Beta 1.

When running unit tests you normally want to know how much of your code is actually tested, a.k.a. code coverage. The way you enable this for your tests and in your team build has changed a bit. First, the previous *.testrunconfig files has been renamed into *.testsettings. To enable code coverage, double click on your .TestSettings file and select the Execution Criteria tab. Here you will see a totally new Collectors section that contains information about what data you want to collect when executing test. One of them is code coverage. The GUI is a bit weird in Beta 1, since you are supposed to first select the Code Coverage checkbox, and then click the Advanced button to specify which assemblies that should be instrumented for code coverage. 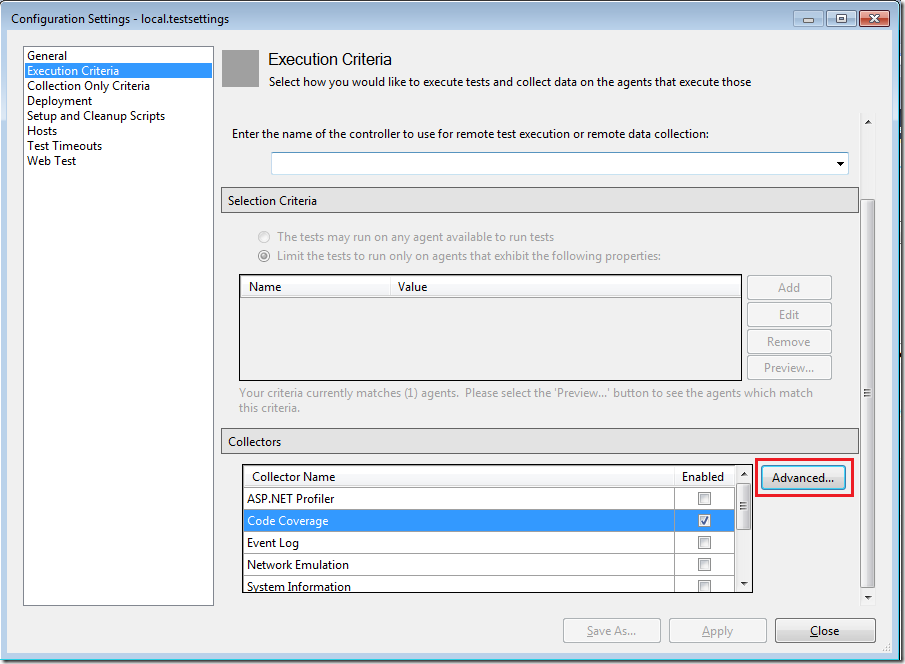 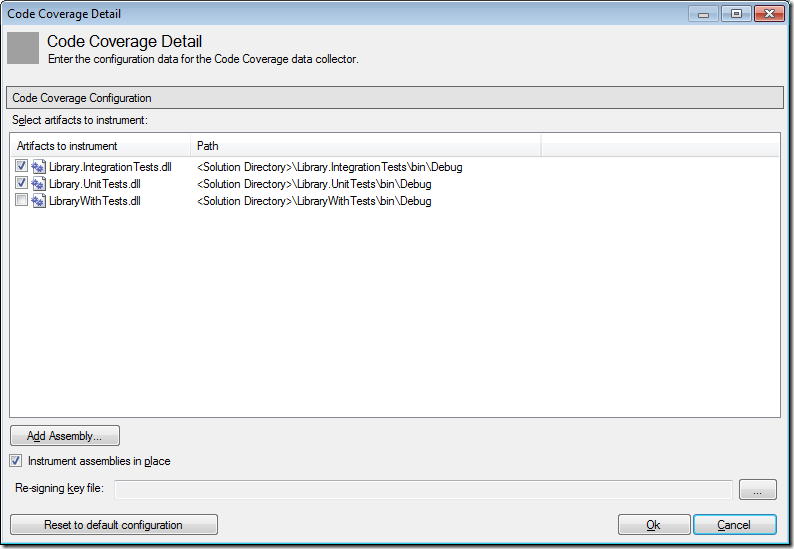 Next, in your team build definition you must specify the name of the test settings file you want to use. This is done using the Test Container TestSettings File parameter. Save the build definition, check in the test settings file and queue a new build. When it has finished, open the build summary that will show you the numbers on number of executed/passed/failed tests, and also the overall code coverage. 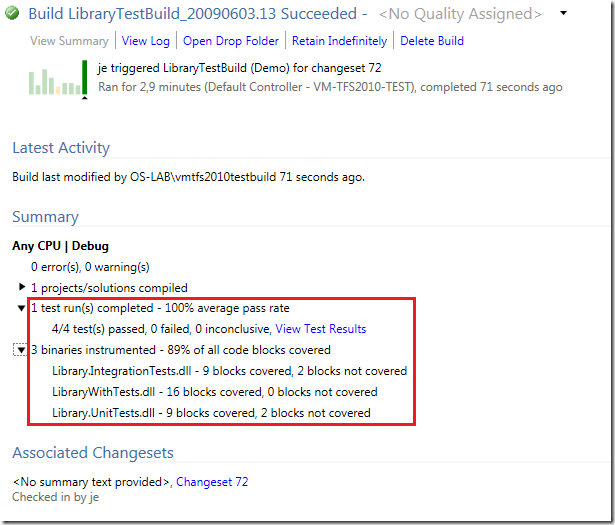 Very nice summary view indeed! If you want to look at the test results in detail, you click the “View Test Results” link which will download the test run to your local machine and then open it in the Test Results window.