GitFlow is a popular workflow that provides a consistent naming convention to your branches as well as clear guidance on how your code should flow through these branches.
GitFlow was introduced by Vincent Driessen in this post back in 2010, and quickly caught a lot of attention in the community. Since GitFlow by nature is very prescriptive it made a lot of
sense to implement tooling support for the workflow, which Vincent added shortly after. His repo is available at https://github.com/nvie/gitflow, although it hasn’t been updated since 2012.
However, several forks has been made, one of the most active is being developed by Peter van der Does at https://github.com/petervanderdoes/gitflow

To make GitFlow more approachable I decided to integrate the GitFlow toolset into Visual Studio, by extending Team Explorer. This makes it very easy to access the commands and lowers the learning
curve a bit by making it available as a UI. Note that the extension includes the GitFlow scripts from Peter van der Does fork of GitFlow and uses them for every command, so it provides the exact same
functionality as the GitFlow scripts does.

You’ll find the extension over at the Visual Studio Gallery, just search for GitFlow in the Extension and Updates Window.
Or, download it from https://visualstudiogallery.msdn.microsoft.com/27f6d087-9b6f-46b0-b236-d72907b54683: 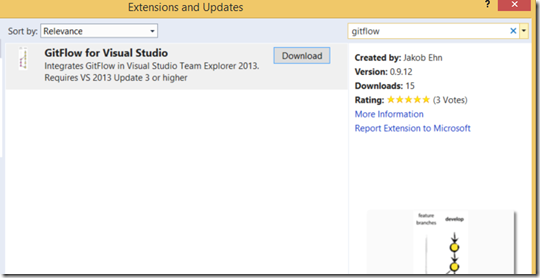 Install it and restart Visual Studio, as usual.

When you connect to a Git repo in Visual Studio (either local or remote), you will see a new icon show up on the home page in Team Explorer: 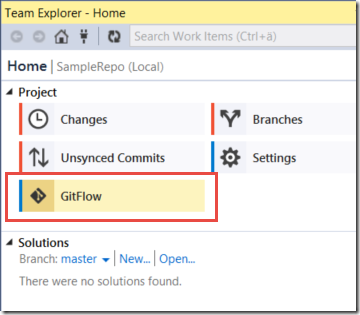 Now, if GitFlow is not installed on your machine you will be presented with the following message:

By clicking Install, the extension will copy the necessary files into the Git for Windows directory, and run the install script for GitFlow.
You can check the installation details for GitFlow here https://github.com/nvie/gitflow/wiki/Windows

(Note: Since copying files into the %ProgramFiles(x86)%Gitbin directory requires elevated priveledges, this is done by running this as a elevated Powershell script.
You will see this flash by during the installation)

Now, you are ready to start use the extension! The first thing you will have to do is to initialize the repo for GitFlow. What this means is that you
should create your permanent development and master branches, and set the naming conventions for future feature, release and hotfix branches: 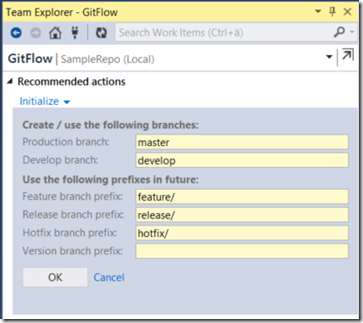 You can also set the Tag prefix, which will be used when you tag a release or hotfix branch as part of finishing up those branches.

Note that all output from all GitFlow operations are sent to a separate output window pane in Visual Studio, which is activated when the command start.
Here you can which gitflow command that were used and the output from it:

From now on, the extension will show the recommended actions based on which branch you are currently in. After initializing the repo, you will be in the develop
branch, so from here you would typically either start a new feature, release or hotfix branch. 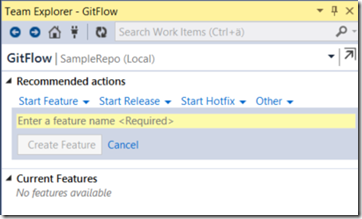 Clicking Start Feature will let you define a name for the branch. GitFlow will add the feature branch prefix for you so don’t include that.

Here I have created a feature branch called SingleSignOn: 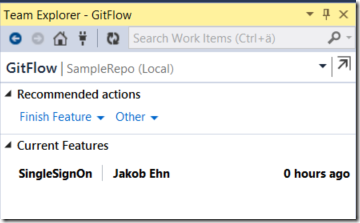 As you can see, the extension will now suggest Finish Feature as the recommended action: 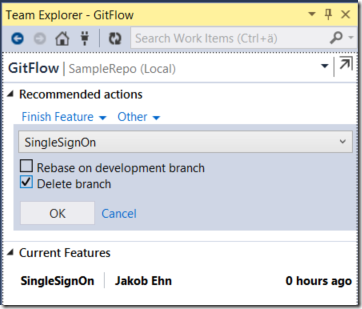 Note that all other actions are still available from the Other menu.

In the GitFlow world, you are allowed to have multiple feature branches but only one release and hotfix branch at any single time.
In fact, if you try to create multiple release branches, you will get an error. 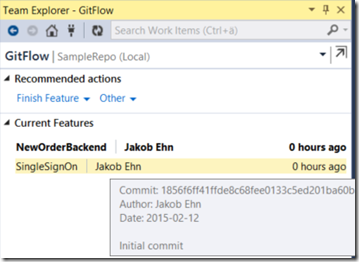 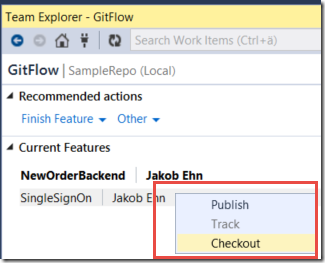 As you can see, if you hover over a feature will get some more details on it, and if you right-click on it you can (depending on the state), checkout, track or publish the feature branch.
I will be looking at adding more functionality here in the future to make is even easier to use this workflow.

I hope you will find this extension useful. Please report any bugs or feedback over at the GitHub site for this extenstion, over at  https://github.com/jakobehn/GitFlow.VS