A year ago I blogged about how to manage your build process templates using the TFS API. The main reason for doing this is that you can (and should!) store your “golden” build process templates in a common location in your TFS project collection, and then add them to each team project that requires those templates. This way, you can fix a bug or add a new feature in one place and have the change affect all build definitions.

Unfortunately, you can’t manage the build process templates this way using Team Explorer, you have to resort to the TFS API to do these things.

In the latest release of the Community TFS Build Manager I have added support for managing build process templates.

The templates are accessible by selecting “Build Process Templates” in the “Show” dropdown:

This will show all registered build process templates, either in the selected team project or in all team projects, depending on your current filter:

All build process templates in the XDemo team project. The grid is of course sortable as the rest of the application. This lets you easily see where the template is registered.

Now, we can right click on a build process template and perform any of the following actions:

The InvokeProcess activity is very useful when it comes to running shell commands and external command line tools during a build process. When it comes to integrating with TFS source control during a build, the TF.exe command line tool can be your friend, as it lets you do most of the usual stuff such as check-in, checkout, add, modify workspaces etc.

However, it can be a bit tricky to handle the output from tf.exe, since it often produces warnings that is not necessarily a problem for your build. This is not a problem related only to tf.exe, but to all applications that produces errors and warnings on the canonical error format.

To solve this problem you need to collect the information that is passed to the Error Output action handler. Note that this handler is called several times so you need to handle formatting of the output in some way. Then, you check the ReturnCode from the InvokeProcess activity and in case this is <> 0, you write the collection information as an error to the build log (using WriteBuildError) and then throw an exception. Otherwise, just write the information to the build log using WriteBuildMessage, so you get all information out there. 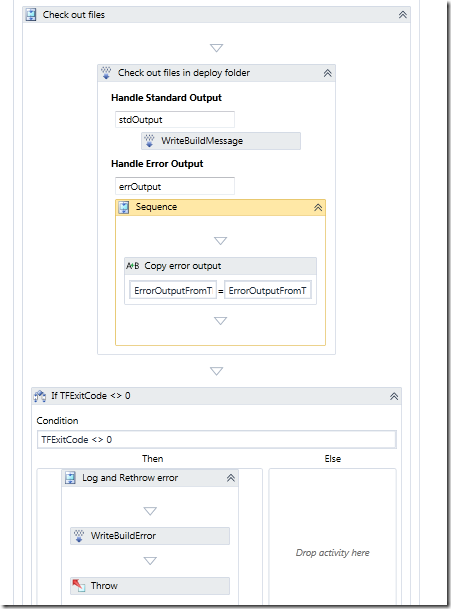 In the “Check out files” sequence I have defined a workflow variable called ErrorOutputFromTF of type string. In the “Handle Error Output” handler, I append the error to this variable, using the Assign activity:

Note that tf.exe in this case outputs information about check-in policies that have been overridden. This is an example of information that would cause the build to partially fail, but is now logged as information.