When upgrading from TFS 2008 to TFS 2010, all builds are “upgraded” in the sense that a build definition with the same name is created, and it uses the UpgradeTemplate  build process template to execute the build. This template basically just runs MSBuild on the existing TFSBuild.proj file. The build definition contains a property called ConfigurationFolderPath that points to the TFSBuild.proj file.

So, existing builds will run just fine after upgrade. But what if you want to use the new workflow functionality in TFS 2010 Build, but still have a lot of MSBuild scripts that maybe call custom MSBuild tasks that you don’t have the time to rewrite? Then one option is to keep these MSBuild scrips and call them from a TFS 2010 Build workflow. This can be done using the MSBuild workflow activity that is avaiable in the toolbox in the Team Foundation Build Activities section: 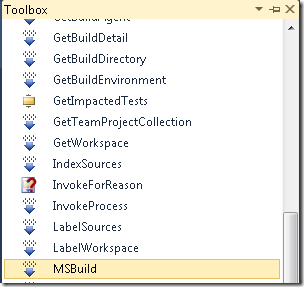 This activity wraps the call to MSBuild.exe and has the following parameters: 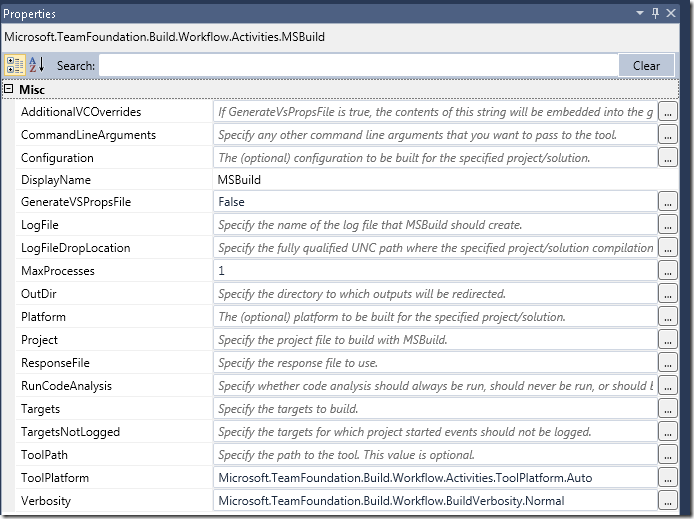 If your MSBuild scripts tries to use Team Build tasks, they will most likely fail with the above approach. For example, the following MSBuild project file tries to add a build step using the BuildStep task:

When executing this file using the MSBuild activity, calling the MyTarget, it will fail with the following message:

You can see that the path to the ProcessComponents.dll is incomplete. This is because in the Microsoft.TeamFoundation.Build.targets file the task is referenced using the $(TeamBuildRegPath) property. Also note that the task needs the TeamFounationServerUrl and BuildUri properties. One solution here is to pass these properties in using the Command Line Arguments parameter:

Here we pass in the parameters with the corresponding values from the curent build. The build log shows that the build step has in fact been inserted: 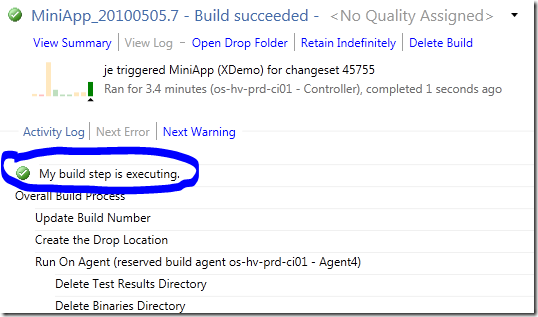 The problem as you probably spted is that the build step is insert at the top of the build log, instead of next to the MSBuild activity call. This is because we are using a legacy team build task (BuildStep), and that is how these are handled in TFS 2010.

You can see the same behaviour when running builds that are using the UpgradeTemplate, that cutom build steps shows up at the top of the build log.