Currently, Microsoft is working hard on a complete rewrite of the TFS Build system. They announced this, among other things, at the Connect event back in November and did a short demo of it. It is not yet available, but as part of the MVP program, a few of us has now been fortunate enough to get access to an early preview of the new build system.

Note: This version is in pre-alpha state, meaning that a lot of things can and will change until the final version!

Microsoft will enable a beta version to a broader public on Visual Studio Online later on this year, and it will RTM in TFS 2015. I will write a series of blog posts about Build vNext as it evolves. In this first post I will take a quick look at how to create and customize build definitions and running them in the new Web UI.

The key principals of TFS Build vNext are:

Creating a build definition in vNext

In this post, I will show how easy it is to create a  new build definition in Build vNext, and customize it to update the version info in all the assembly files using a PowerShell task with a custom script.

Note: There will probably be a versioning task out of the box in the final release, but currently there isn’t.

The build definition is complete, let’s kick off a build. Click on the Queue build.. button at the top to do this. This will show the live output of the build, both in a console output window and in an aggregated view where the status of each task is shown:

Here you can note several nice features of build vNext:

When the build completes, you will see a build summary and you can also view a timeline of the build where the duration of each task is shown: 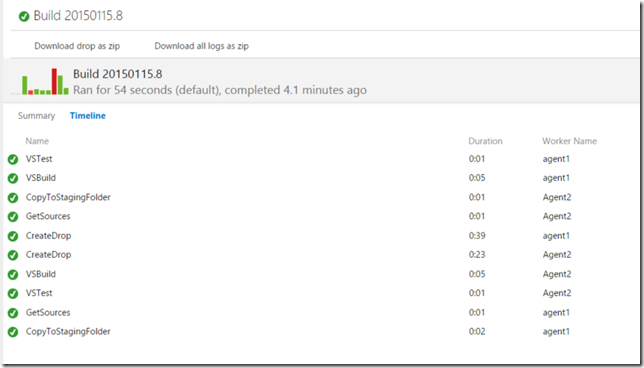