By now, many of you should have had the chance to at least play with the new build system that was released in TFS 2015 and Visual Studio Online. Here is an introductory post I wrote about it when it entered public preview back in January.

Doing the basic stuff is very easy using the new build system, especially if you compare it with the old one, which is now referred to as XAML builds. Creating and customizing build definitions is just a matter of adding the tasks that you want to use and configure them properly, everything is done using the web interface that is part of the TFS Web Access.

There are (of course) still some things that are not completely obvious how to do. One of these things is how to generate a custom build number for a build. Every build definition has a build number format field where you can use some macros to dictate what the resulting build number should look like. 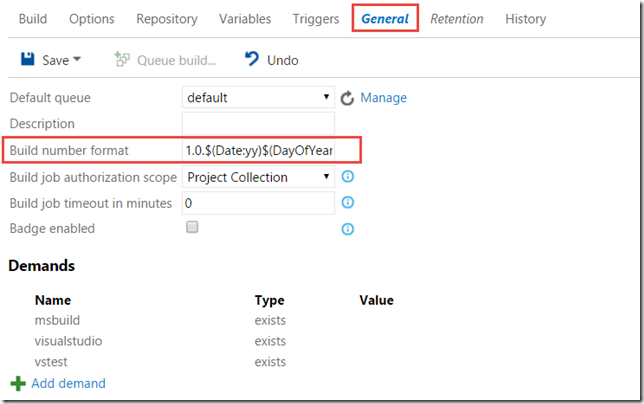 The build number format can contain a mix of text and macros, in the above example I have used some of the date macros to generate a build number that uses todays date plus an increment at the end.

Sometimes though you will have the requirement to generate a completely custom build number, based on some external criteria that is not available using these macros.

This can be done, but as I mentioned before, it is not obvious! TFS Build contains a set of logging commands that can be used to generate output from a task /typically a script) that is generated in a way so that TFS Build will interpret this as a command and perform the corresponding action. Let’s look at some examples:

This logging command can be used to log an error or a warning that will be added to the timeline of the current task. To generate this command, you can for exampleuse the following ‘PowerShell script:

As you can see, there is a special format that is used for these commands:  ##vso[command parameters]text. This format allows the build agent to pick up this command and process it.

This will change the build number of the current build to 1.2.3.4. Of course, you would typically generate this value from some other source combined with some logic to end up with a unique build number.

You can find the full list of logging commands at https://github.com/Microsoft/vso-agent-tasks/blob/master/docs/authoring/commands.md